This is Madness, Madness Combat to be exact. 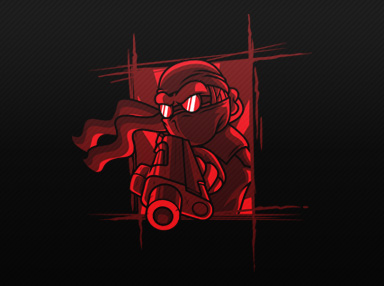 A running animation made by one Matt "Krinkels" Jolly, so far the series has reached 10 episodes with 3 side episodes showing what happens to two of the side characters.

As great as this flash is it isn't exactly for eveyone, on the site it is currently situated it is rated 17+ and features alot of blood and many humanoid figures being killed in different ways.

The series started with a storyless blood(less) bath in where a single man takes down 30 men, two zombies and a Jesus looking character.

After that the story starts in Nevada (as it does in each of them) with the protagonist named Hank J. Wimbleton hunting the sheriff but in the end fails and is killed by Jesus.

In almost all of the episodes Hank dies but this never makes the series any less interesting since the deaths are unique from each other.

I would highly recommend those that can watch this animated series watch it indefinately it is amazing, the series can be found here: http://www.newgrounds.com/ or at Krinkels official site here: http://www.krinkels.net/index.html
Posted by R.A.D at 02:03