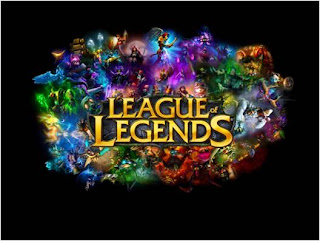 I am reviewing League Of Legends and that is what I think about the game.

Before we deal with the game itself, I’d just like to point out that the natural acronym for this title is LoL. I can’t tell whether I should congratulate the game on that accomplishment, or ridicule it.

So League of Legends is the next evolutionary step for the Defence of the Ancients mod, colloquially known as DotA. Back in the Warcraft 3 days, DotA was nearly the only thing about Warcraft 3 that I actually liked. It felt like the game made that Warcraft 3 really wanted to be at all times, instead of the inconsistent mash-up of action, RPG, and RTS that it really was.

If you are unfamiliar with DotA, let me sum it up: you command a hero unit in the midst of a war. Friendly and enemy (and even some random wild card) troops stream at each other across the battlefield, generally grinding into one another with little more than casualties to show for it. As the hero, you need to intercede in key places, kill enemy troops, gain experience, level up, get beefier, and eventually guide your side to victory over the enemy team. It takes the base and resource management out of Warcraft 3, leaving you free to concentrate on micro-managing one bad-ass guy. And it worked out pretty well.

League of Legends duplicates the same basic gameplay, but expands upon it considerably. First up is the Summoner – that’s you. You have your own separate experience value, gain your own abilities, and have your own stats to track. Your summoner is the only persistent element to the gameplay, as your hero is selected fresh at the start of every match, and always begins at the lowest level. As you level up and gain ‘influence,’ you gain access to more champions and special abilities. You also start earning abilities in three trees of masteries – basically special skills and abilities for your summoner.

I will give this game 7/10 because it’s very fun to play alone and with your friends.